Visit of Ms. Miyoshi, Ambassador in charge of Arctic Affairs of Japan 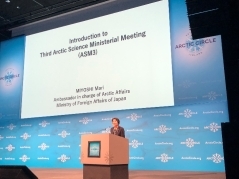 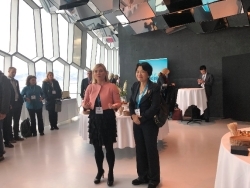 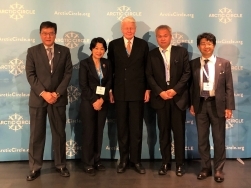 The annual International forum, Arctic Circle, was held at the Harpa International Conference Centre from the 10th to the 13th of October. Ms. Mari Miyoshi, Ambassador in charge of Arctic Affairs of Japan, along with Ambassador Kitagawa, attended the forum. In the plenary session, Ambassador Miyoshi gave a speech on Japan‘s involvement in the Arctic and the future cooperation with Iceland, following a speech by Ms. Lilja Alfredsdottir, Minister for Education, Science and Culture.

To formally announce the ASM3, Arctic Science Ministerial Meeting that Japan and Iceland decided to co-host in 2020, special session was also held during the Arctic Circle. It was a great opportunity to inform the general public that the relations between Japan and Iceland will be further strengthened even in the area of the Arctic.